How’s it hangin’?  It has been such a busy week for me with camp, the election, and CrossFit that I feel like it was just Sunday, but it’s not.  It’s Thursday dudes.

Monday night after camp I went over to Solidarity CrossFit to practice some elements and give out a few coaching pointers.

you gotta lay back into your swing here

If there’s one thing I’m a stickler for it’s proper form, and the erg is a place where most inexperienced rowers struggle.  I mean, look at me, I’m no giant, but I sure can drop those meters like a boss.  I think everyone appreciated that I took the time to help make some technical tweaks, and I sure did love finally seeing the new facility. 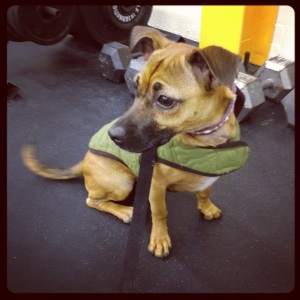 I was exhausted by minute 20 – I mean listen, it had been a long day at camp – so I checked out before the WOD was over, but I think everyone really did benefit from my insight and experience.  I’m working on tweaking my instructional video on box jumps.  I’m at 24″ and can do 20 in a row without stopping, but my goal is 50.  I’m thinking I’ll have it down by January.

i got lots of thank you love before I left

Tuesday I took off from camp because it was the election and I was glued to the news all day analyzing the polls and watching the lines.  The fact that I can’t vote is just so upsetting I can’t even tell you.  Tank and I had some buddies over to watch the results come in, and we all made it into the double digits but I totally faded before any of the speeches.

I’m just waiting for someone to come to the plate and talk seriously about water bowl sanitation issues.  I mean, this is getting ridiculous.  All of us drinking out of the same contaminated water, and the big dogs with their big tongues draining the supply before us littles get in to the play yard? It’s totally unjust!  I need to hear how these jokers are planning on regulating that, and all the aggressive sniffing that happens in parks and public settings.  Did I say you could put your snout there? No. I didn’t.  And that’s assault, brotha.  I have so many agenda items that I care so passionately about that I can’t go on because I just wouldn’t be able to stop.  I wouldn’t.  It’s insane.

I was back at camp yesterday, which was awesome, so awesome in fact that I had to take another rest day today.  I’ve been chilling with Tank a bunch on my off days because he just found out that he’s going to have to wear his spectacles for life because he can’t see out of his one eye.  I mean, seriously, no more Tanky Potter jokes, he’s super sensi about it.  Apparently he’s never had full vision so he doesn’t know any different but that hasn’t seemed to console him during this new mental anguish.

Stay tuned for updates on the ‘Glass Eye Fund’ that I’m starting for Tank.  I mean, what better way to compliment the scary ‘nam stories he tells all the neighborhood kids than to have a glass eye that actually pops out?! So far he still wants to keep his eye but I’m pretty sure I can get him on board eventually.  I mean, what wouldn’t he give up to have a better party trick? His snaggle tooth just ain’t cutting it anymore.

I’m back to camp tomorrow, and hopefully also back on the grind with my training videos.  Gotta keep things moving around here.

You Monsters Are People.
Bug Says