Dudes.  Sorry this post is slightly delayed, but I am just recovering from yesterday’s excitement.  PRESIDENT OBAMA came to visit yesterday.  He just lives up the road a couple of hours in DC, so he’s not far, but he doesn’t get a ton of time to come for a visit.  Even Sissy Spacek came out to to the Downtown Mall to surprise the President (she lives here too). A pretty rad Wednesday afternoon if you ask me. 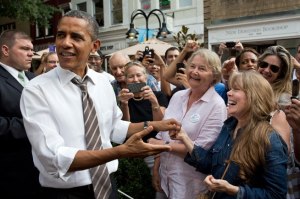 Sweet candid pic of Sissy and B. snapped by P. Souza.

This was a very important visit for him since the election is fast approaching, but it was more important for me since I follow his campaign closely to gather tips and inspiration for my own political run.  Yes, that’s right, I’ve still got my eye on the great honor of being class president at camp, and since Obama and I are practically twins, I pay close attention to how he carries himself and his general approach to connecting.

I’ve been working on my presidential look

I need a flag background. For real.

I’m not saying that I think impersonating Obama is going to win me the vote at camp, but I’m committed to learning from his leadership skills and you can bet your sweet hiney that I’ll be studying his speeches before I hit the campaign trail.  Tank was supposed to be my campaign manager, but I think his conspiracy theories might hurt my chances.

I’m working on getting buttons for my online store, but in the meantime, don’t forget to vote for me in the Real House Pets of Cville competition.  It has been a tough race so far, but I’m due in at camp tomorrow and I’m hoping to generate a little word of mouth publicity.

Time for some Z’s.

Error: Twitter did not respond. Please wait a few minutes and refresh this page.

You Monsters Are People.
Bug Says